The 2002 CONCEPT KEL alarm is straightforward to install, BUT PLEASE TAKE A COUPLE OF MINUTES TO READ THESE INSTRUCTIONS !

Key Fobs – carried by the user/s

PIR head - that should be fitted at eye level "looking down" the caravan’s interior. Avoid fitting where it "looks" straight at a window where possible.

Ensure that the 12Volt leisure battery is disconnected, the mains hook up is disconnected and the 12S plug is not plugged into a tow vehicle (or test box).

It’s well worth spending a few minutes deciding where to fit the alarm system’s components. Often wiring can be run at the back of bed boxes and cupboards, which saves drilling through the floor and working underneath the caravan. The wiring diagram shows how the system is connected.

Screw the terminal block to the caravan floor or panel so that the 12 way flying lead can be connected neatly between it and the socket on the control box. The control box has a removable battery cover to enable the caravan owner to change the PP3 battery once a year. This cover is removed by firmly pressing down in the region of the arrows then sliding away from the case.

This should be mounted at eye level "looking down" the caravan. Usual mounting positions are at the front of the caravan, on either side or in the centre. Avoid mounting the PIR head where it is directly facing a window. Remove the front half of the case by undoing the single screw, then carefully hinging it down and off. Carefully remove the printed circuit board, which is secured by one screw. The PIR head is mounted using the pre-drilled holes in the base. Re-fit the printed circuit board, and then connect the three wires from the control box as shown on the wiring diagram. Refit the front half of the case and secure it with the single fixing screw.

This should be fitted to a rear steady with the magnet fixed to the "in board" end of the spindle and the bracket assembly mounted adjacent to it. Rotation of the leg winder should cause the magnet to pass within a couple of milli metres of the sensor fitted to the bracket. Please refer to the diagram.

Clean any grease/road dirt off the part of the spindle that the magnet is to be fixed to. Then stick a double-sided sticky pad onto the magnet, place the magnet onto the spindle then fix in place with the two tyraps. Tighten the tyraps with a pair of pliers - pull hard! Then cut off the surplus plastic from the tyraps. IMPORTANT NOTE – on some caravans the spindle may not be long enough to fasten the magnet onto. In these cases use the grey plastic tube as an extension tube. Simply tap onto the metal spindle using a hammer. Then fix the magnet to the grey tube as described above.

Mount the bracket onto the underside of the caravan floor, positioned so that the magnet passes within a couple of milli metres of the sensor fitted to the bracket. Finally, connect the two wires from the control box to the two used terminals on the leg sensor. 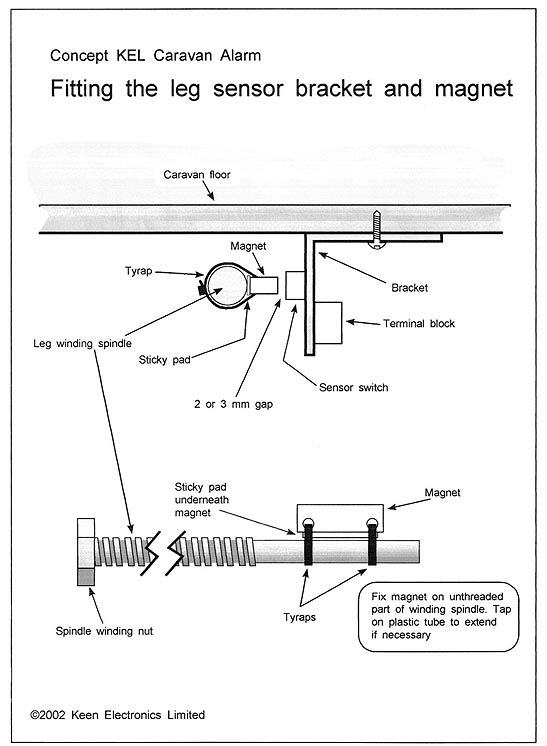 Please refer to the wiring diagram at the end of the text.

Connect the PIR head to the control box using the 4-core cable supplied in the kit as shown in the wiring diagram.

Locate a convenient point in the 12N wiring to connect to the BRAKE wire - usually red in colour.

Finally, connect the 12 Volt supply from the leisure battery to the control box. Do not use twin flat speaker cable, as it is rather thin for this application. A 0.75mm or 1.0mm cable (24/0.2) or similar is recommended. In some caravans it is practical to connect these wires via the battery charger, but in others it may be easier to connect direct to the leisure battery (always through a 2A in line fuse)

The button on the key fob marked LIGHT can be used to switch the awning light if required.

The wiring diagram shows how this should be connected.

IMPORTANT NOTE – the control box MUST be connected exactly as shown in the wiring diagram. The switch inside the control box is a transistor NOT a relay contact. If you cannot locate the negative return wire to break into then contact Keen Electronics who can supply you with a relay. This enables the positive feed wire from the awning light switch to be broken into and switched by the control box via the relay.

With the key switch in the control box in the OFF position, check that the PIR detector flashes red when you move in front of it. (Note – when power is first applied there is a 2-minute "warm up" period when the PIR will not detect movement)

Now turn the key switch clockwise, the siren should "cheep" once.

NOTE – when pressing the ALARM or LIGHT buttons on the key fobs you need to press the buttons for a couple of seconds.

Press the ALARM button on the key fob to switch the alarm ON. The siren should cheep twice indicating the alarm is on.

Press the ALARM button a second time, the siren should cheep once indicating the alarm is OFF.

Now press the ALARM button, siren cheeps twice and alarm is ON. Now press both buttons together, siren sounds for 2 minutes, or until ALARM button is pressed again.

When the alarm is ON any one of the following actions should trigger the alarm sounding the siren instantly:-

Hitching up and inserting the 12N (black road lighting) plug

When hitched up removing the 12N plug

When hitched up with the 12N plug inserted, using the footbrake in the tow vehicle (ignition may need to be turned on)

If a PP3 battery has been fitted in the control box, disconnecting the leisure battery.

When the alarm is ON and the alarm is triggered the siren should sound for 2 minutes, unless switched OFF with the ALARM button on the key fob.

WHEN TESTING THE ALARM’S 12N PLUG OPERATION PLEASE NOTE THAT THE VAN MUST BE COUPLED TO THE TOW VEHICLE (That is, the tow head of the caravan must be on the tow ball of the tow car).

IMPORTANT NOTE – if the caravan is fitted with a stabiliser using fibre pads an electrical connection will not be made through the tow ball. This will prevent the alarm from being triggered when the 12N plug is inserted. The alarm will however be triggered when the 12S plug is inserted (as well as the 12N plug). A way round this problem is to insert some conductive metal gauze (wire wool scouring pad) into the cup of the tow head. Should a thief hitch up a connection should be made through the metal gauze. 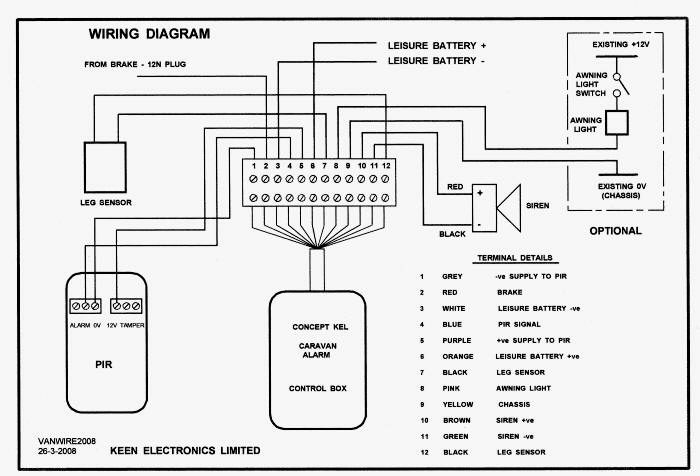 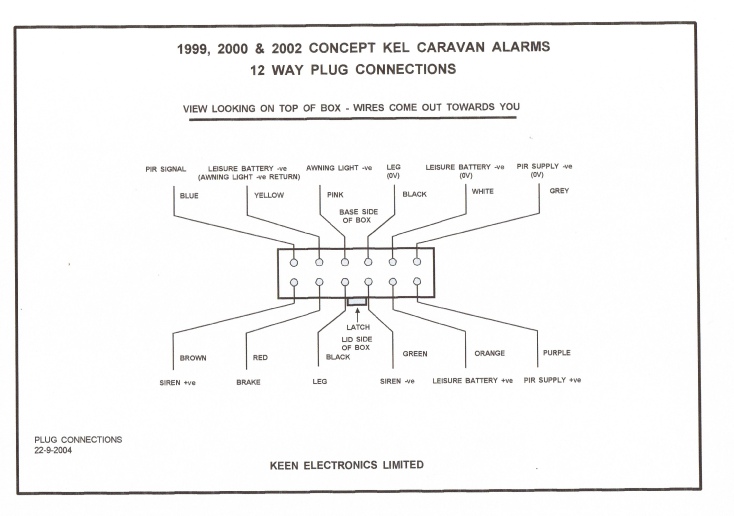