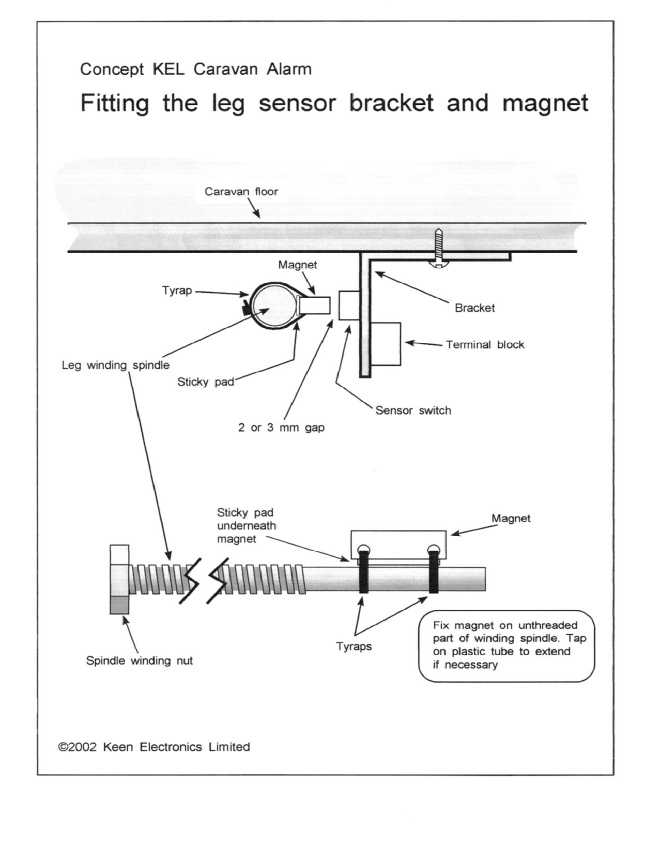 Key Fobs – carried by the user/s

Splash proof siren – this must be mounted where a thief cannot easily get to it. It is normally convenient to mount it close to the control box - over a grille in the floor, so the sound can get out and be heard outside the van When mounting over a grille in the floor ensure that the siren is a good fit, so that all of the sound goes through the floor and outside. (It’s no good making a lot of noise in the bed box!!)

PIR head – a ceiling mounting type is supplied for factory fitting. A wall mounting type for fitting to built caravans. Mount the PIR where it can detect intruders. Avoid fitting where it may pick up air currents from heaters.

Ensure that the 12Volt leisure battery is disconnected, the mains hook up is disconnected and the 13 pin plug is not plugged into a tow vehicle (or test box).

It’s well worth spending a few minutes deciding where to fit the alarm system’s components. Often wiring can be run at the back of bed boxes and cupboards, which saves drilling through the floor and working underneath the caravan. The wiring diagram shows how the system is connected.

This should be mounted in a suitable location in the ceiling where an intruder will be detected. Avoid mounting the PIR head where it will be subject to air currents from heaters. Remove the lens cover using a wide flat bladed screwdriver in the groove that separates the two halves. Carefully remove the printed circuit board, which is secured by one screw. The PIR head is mounted using the pre-drilled holes in the base. Re-fit the printed circuit board and tighten the single screw. Connect the three wires from the control box as shown on the appropriate wiring diagram. Refit the lens cover and press to snap into place. NOTE – the lens cover has a small keyway so will only fit in one position.

This should be mounted at eye level “looking down” the caravan. Usual mounting positions are at the front of the caravan, on either side or in the centre. Avoid mounting the PIR head where it is directly facing a window. Remove the front half of the case by undoing the single screw, then carefully hinging it up and off. Carefully remove the printed circuit board, which is secured by one screw. The PIR head is mounted using the pre-drilled holes in the base. Re-fit the printed circuit board then slide it up/down until the scale on the right hand side is at position 2. Connect the 3 wires from the control box as shown on the appropriate wiring diagram. Refit the front half of the case and secure it with the fixing screw. (The PIR must be mounted with the terminal block at the top)

This should be fitted to a rear steady, with the magnet fixed to the "in board" end of the spindle and the bracket assembly mounted adjacent to it. Rotation of the leg winder should cause the magnet to pass within a couple of milli metres of the sensor fitted to the bracket. Please refer to the diagram.

Mount the bracket onto the underside of the caravan floor, positioned so that the magnet passes within a couple of milli metres of the sensor fitted to the bracket. Finally, connect the two wires from the leg sensor to the control box as shown in the wiring diagram.

Please refer to the wiring diagram at the end of the text.

Connect the PIR head to the control box using the 4-core cable supplied in the kit as shown in the wiring diagram. Please note that only 3 cores are used.

Locate a convenient point in the 13 pin wiring to connect to the BRAKE wire - usually red in colour.

Finally, connect the 12 Volt supply from the leisure battery to the control box. Do not use twin flat speaker cable, as it is rather thin for this application. A 0.75mm or 1.0mm cable (24/0.2) or similar is recommended. In some caravans it is practical to connect these wires via the battery charger, but in others it may be easier to connect direct to the leisure battery (always through a 2A in line fuse)

The button on the key fob marked LIGHT can be used to switch the awning light if required.

The wiring diagram shows how this should be connected.

IMPORTANT NOTE – the control box MUST be connected exactly as shown in the wiring diagram. The switch inside the control box is a transistor NOT a relay contact. If you cannot locate the negative return wire to break into then contact Keen Electronics who can supply you with a relay. This enables the positive feed wire from the awning light switch to be broken into and switched by the control box via the relay.

With the key switch in the control box in the OFF position, check that the PIR detector flashes red when you move in front of it. (Note – when power is first applied there is a 2-minute “warm up” period when the PIR will not detect movement)

Now turn the key switch clockwise, the siren should “cheep” once.

NOTE – when pressing the ALARM or LIGHT buttons on the key fobs you need to press the buttons for a couple of seconds.

Press the ALARM button on the key fob to switch the alarm ON. The siren should cheep twice indicating the alarm is on.

Press the ALARM button a second time, the siren should cheep once indicating the alarm is OFF.

Now press the ALARM button, siren cheeps twice and alarm is ON. Now press both buttons together, siren sounds for 2 minutes, or until ALARM button is pressed again.

When the alarm is ON any one of the following actions should trigger the alarm sounding the siren instantly:-

Hitching up and inserting the 13 pin plug

When hitched up removing the 13 pin plug

When hitched up with the 13 pin plug inserted, using the footbrake in the tow vehicle (ignition may need to be turned on)

When the alarm is ON and the alarm is triggered the siren should sound for 2 minutes, unless switched OFF with the ALARM button on the key fob.

The Alarm Status table in the DIAGNOSTICS section of the Operating Instructions gives number of flashes for each sensor. The LED will continue flashing until the alarm has been reset with the key switch. The LED will revert to normal regular flashing when the alarm is next turned ON. Turning the alarm OFF will then stop the LED flashing. This feature is useful to advise the owners if the alarm has been triggered in their absence and for fault finding (especially intermittent false alarms).

If while the alarm is ON an alarm occurs, the siren will sound for 2 minutes and the status LED will flash a certain number of times, pause, flash the same number of times, pause, etc. The alarm can be turned OFF then back ON then OFF, but the LED will keep flashing. This enables the sensor which has triggered the alarm to be easily identified. To reset the status LED the small key is used to turn the control box off, then back on again. On turning the alarm back on with the key, the siren will “cheep” once and the LED will not flash. 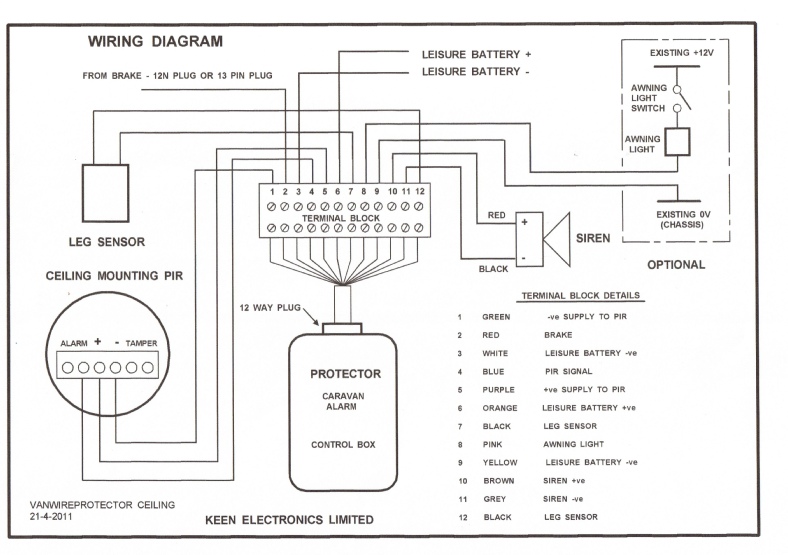 PLEASE NOTE !! WIRE COLOURS WILL BE DIFFERENT & TERMINAL BLOCK IS NOT USED

PLEASE REFER TO PLUG DIAGRAM AT THE BOTTOM OF THIS PAGE 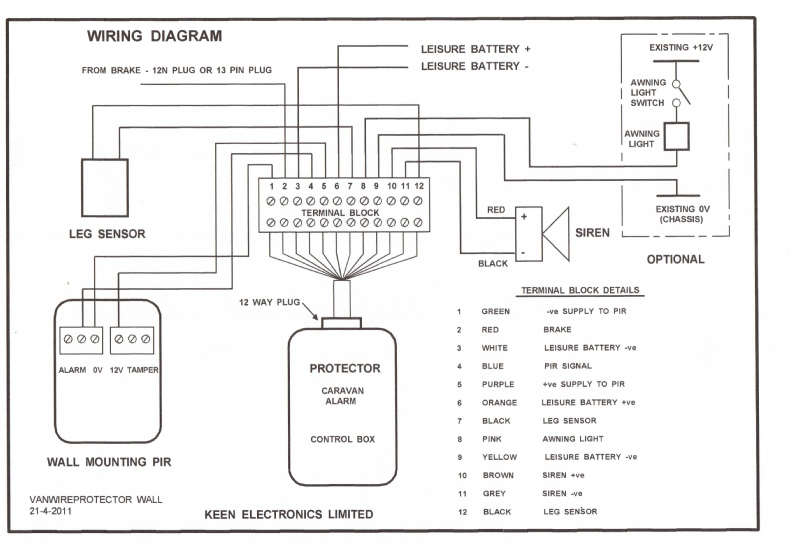 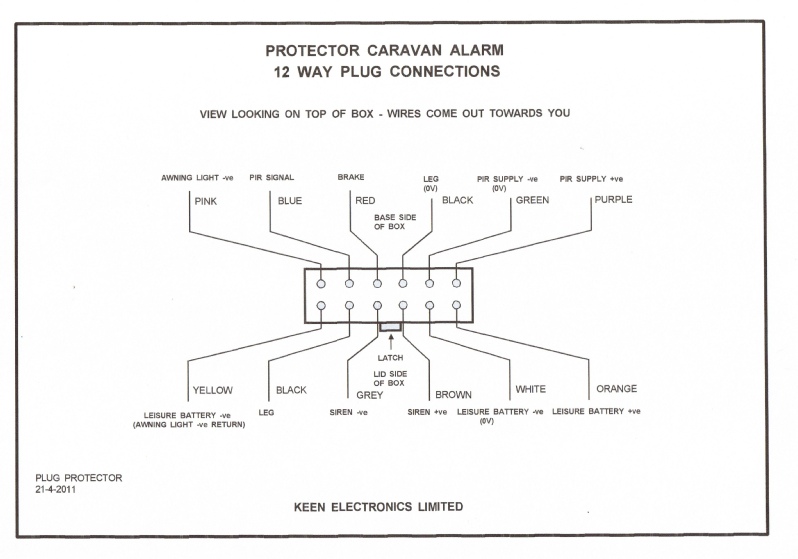